The sound of DownTown Mystic is “vintage yet modern”, continuing in the legacy of rockers like Tom Petty and Bruce Springsteen.  The music is rooted in all the great traditions of American Rock‘nRoll, blending storytelling songs with vintage guitars and analog recording into a unique style that somehow manages to sound as contemporary as anything currently available. For influences think Buffalo Springfield meets Rockpile.

DownTown Mystic is the alter ego of American Rocker, Robert Allen, whose passion for “old school” recording borders on obsession. Robert adds, “I grew up listening to all these great records and their sound and style stayed with me”. Robert is joined by a stellar cast of musicians, including drummer extraordinaire Steve Holley (Paul McCartney/Wings/Elton John/Ian Hunter) & urban legend Paul Page (Dion/Ian Hunter) on bass, as well as one of the great rhythm sections in the history of American Rock’nRoll–Max Weinberg & Garry Tallent of Bruce Springsteen’s E Street Band.

DownTown Mystic has forged an identity as an Indie Artist around the world, having sync-licensed songs on over 200 TV shows broadcast on major networks like NBC, CNN, A&E, MTV, ESPN, USA, CMT, History, Discovery, National Geographic and TV streaming services that include Netflix, Amazon, Apple Plus, Hulu, Disney Plus and YouTube. International viewers from London to Hong Kong watch TV shows with DownTown Mystic music in them, as well as films like Disney’s Flora and Ulysses.

Radio has also played a crucial role in the career of DownTown Mystic. Radio airplay in over 30 countries has helped to bring the music to a worldwide audience. It started with veteran tastemaker, Jed The Fish, playing a DownTown Mystic track as his “Catch of The Day” on “World Famous” KROQ in LA, one of the most influential rock stations in the US. This would be followed by the “Mayor of The Sunset Strip”, legendary KROQ DJ Rodney Bingenheimer playing another track, leading to national airplay.

Other Radio achievements include a #1 single and #3 album on the Roots Music Report Charts and #1 on the European Indie Top 200 Chart and debuting on the Top 25 Euro/Americana Chart, as well as debuting in the Top 5 Most Added on the Americana Music Assn. (AMA) Radio Chart. 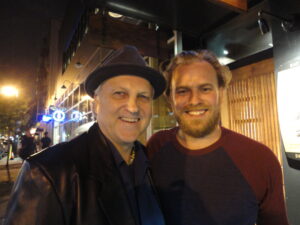 What they’re saying about Downtown Mystic…

“Robert Allen AKA DownTown Mystic, took those old school influences that were planted in his musical soul, tended them with reverence, pollinated them with some fresh melodies and produced a tasty crop of tunes”…Kath Galasso/OnStage Magazine

“an originality and uniqueness of sound that is exclusive to the DownTown Mystic project. Robert Allen and his crew are cutting the line and leading the way in making classic rock new again and they’re doing it with the skills of a veteran and the excitement of a rookie”…Lisa D’Arrigo/IndieMinded.com

“one of the best albums of the year”…John Shelton Ivany/jsiTop21.com

“give this album a good listen. You won’t regret it”…Dani Heyvaert/Rootstime/Belgium

“unpretentious spirited music with personality and an endless flow of energy that is simply irresistible”…Keith “MuzikMan” Hannaleck/MuzikReviews.com

“DownTown Mystic is a real pleasure: a pure sound with a brilliant production and top musicians gives the listener the feeling there is still reasons to hope in Music”…Mike Penard “The DJ” / “American Roots Music”/RadioISA/France

“Who has ever succumbed to the charm of Creedence Clearwater Revival, will love Robert Allen’s DownTown Mystic”…Franz XA Zipperer/Piranha/Germany

“a surprisingly addictive and enjoyable set”…Get Ready To Rock.com UK

“classic sounding American rock music, this is the Hallmark of the band DownTown Mystic”…Wasser-Prawda Germany

“DownTown Mystic is really remarkable for its sound, a unique combination of R&R, Blues & Country. But a sound is not enough to give a band a reputation. DownTown Mystic has got a good spirit and a good energy . Vocally and instrumentally, DownTown Mystic is a real pleasure: a pure sound with a brilliant producton and top musicians gives the listener the feeling there is still reasons to hope in Music. Listen to this band and you’ll hear a band with a real musical personality; a band that plays with honesty, simplicity, efficiency.”  Mike Penard “The DJ” / “American Roots Music” on RadioISA

“Downtown Mystic is a powerful rock band that has the sounds of good old rock and roll. With a hint of Bob Seger and the Silver Bullet Band plus many other great rockers, Downtown Mystic is an uptown band for those who love to rock…”  Jeffrey Rubin/BananaPeelRadio

“Down Town Mystic creates real and important soul music. This music is not to be missed and should be a ‘must listen’ for anyone who loves roots and soul music.”  Chris Keaton, Keaton Music Ventures

“One of the best albums of the year”…John Shelton Ivany